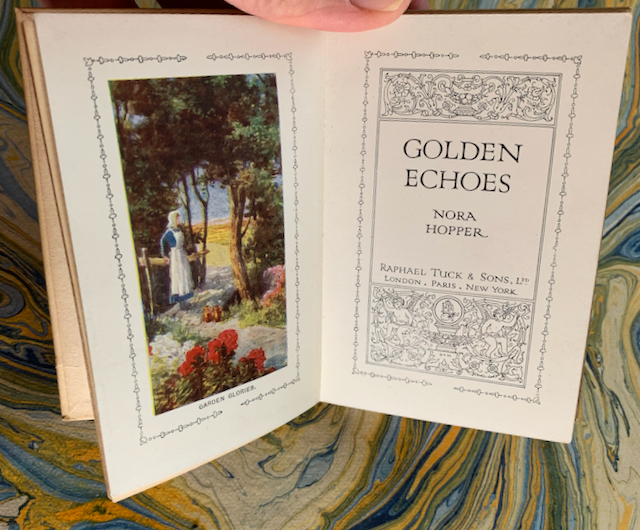 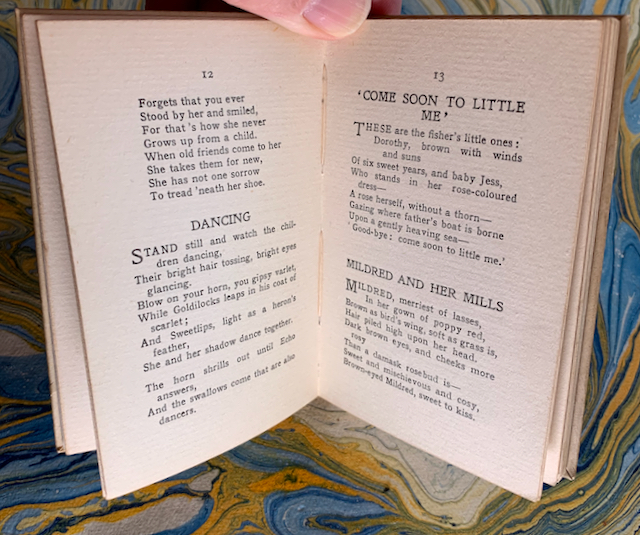 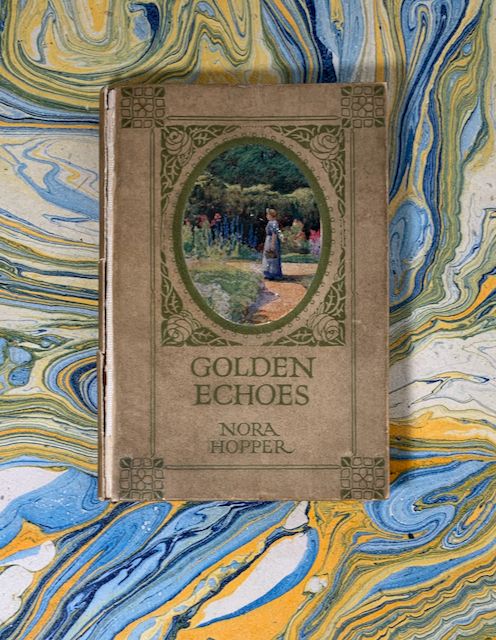 16mo in 4s. 4 1/16 x 2 3/4 inches. 64 pp. Half-title, color frontispiece, title page printed within a decorative border, Introduction entitled "Nora Hopper" by E. V., printed on laid paper; text clean, unmarked. Parchment paper printed in green with an illustrated label on the front cover; binding square and tight, soiled, boards a bit bowed, the front hinge is split the length the of the gutter from head to tail, but the weak hinge seems typical; the only other online offer at the time of cataloging is cracked with loss at the foot of the spine. Early gift inscription on front pastedown: "To Mary, With my best wishes, M. R. Lawson." GKK20120b-003. Good. FIRST EDITION. This little book of poetry is interesting from two points of view; it highlights the literary work of Nora Chesson and weds her poetry with an important English publishing house. Raphael Tuck & Sons began in London in October 1866, started by Raphael Tuck and his wife Ernestine. Their main line of business included pictures, greeting cards, and postcards, their most successful line. Three of the couple's four sons participated in the business with the second son, Adolph, becoming chairman and managing direct from 1870-1926. The firm ran postcard and poetry competitions through the early 1900s. Nora Chesson won such a competition for poetry in 1894 (see the Introduction). This book has a colorful frontispiece and also a color illustrated label on the front cover. Through his publishing business, Raphael Tuck, a native of Prussia, opened up new fields of labor for artists, lithographers, engravers, printers, ink and paste board makers, and several other types of trades. This volume is from the "Crystal Thoughts From the Poets" Series which includes anthologies of the work of Shakespeare, Tennyson, Longfellow, Burns and Adelaide Procter. "Nora Chesson was an English journalist and poet. She won for herself a distinct celebrity as a contributor to most the English periodicals and newspapers of her time. Eleanor Jane Hopper was born in Exeter, 2 January 1871. Her father, Capt. Harman Baillie Hopper, was Irish. She was a participant in the Irish Literary movement of the 1890s, having some influence on W. B. Yeats in particular with her "Ballads in Prose" (1894). Her career as an authoress in poetry and in prose began in 1887, when she was not quite seventeen years of age, and she went on increasing her literary reputation until her death. In 1901, she married the English man of letters Wilfred Hugh Chesson (1870-1953). She died 14 April 1906." Wikipedia.