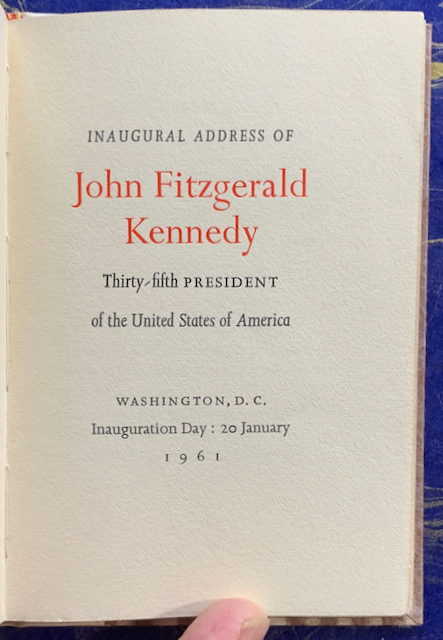 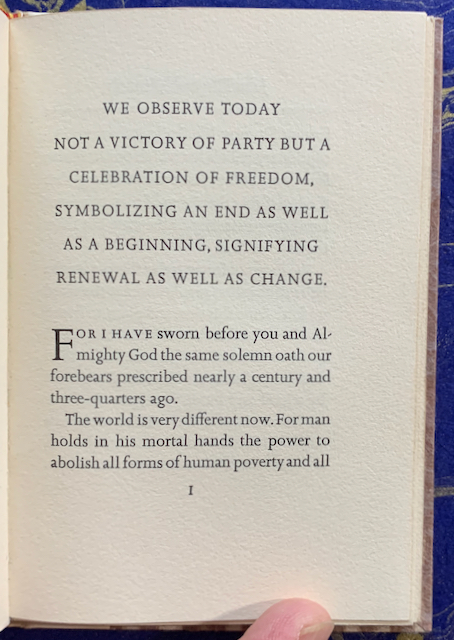 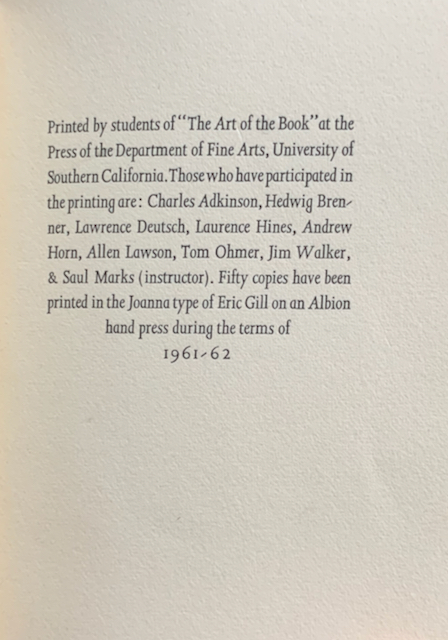 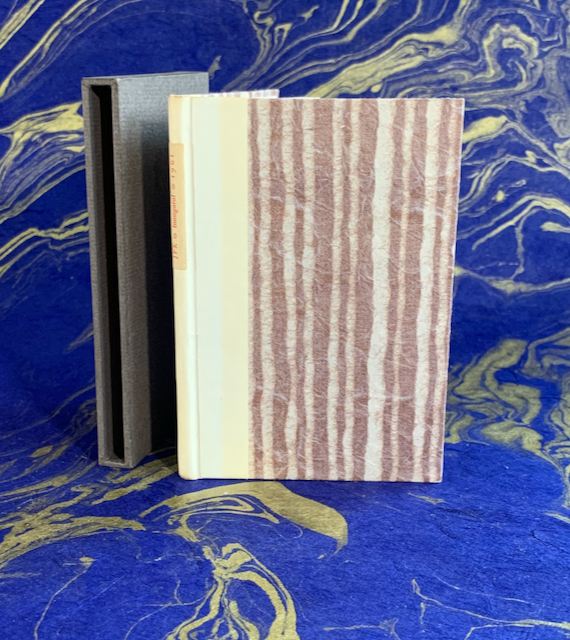 24mo. 4 7/8 x 3 3/8 inches. [iv], 13, [3] pp. Half-title, title page printed in red and black, running heads; text clean, unmarked. Parchment paper spine, decorative paper over boards, printed paper spine label, clear plastic dust-jacket, slip case covered with grey paper; binding square and tight, light offsetting from adhesive on spine parchment. From Glen Dawson's personal collection without distinguishing marks. SCARCE. GKK1020-001. Fine. LIMITED EDITION of 50 copies printed in Eric Gill's Joanna type on an Albion hand press by the students of "The Art of the Book" course taught by Saul Marks at the Press of the Department of Fine Arts, University of Southern California during the terms of 1961-62. This is an elusive item that rarely makes it into the market. With the unmistakable taste and design talent of the course instructor, Saul Marks, in strong evidence. An elegant publication distributed mainly to the students of the course, and close friends and associates, including Glen Dawson and Wallace Nethery (whose copy inscribed by Saul Marks we handled in 2010). Still only 4 institutional holdings as in 2010, see below. The students working on this project were Charles Atkinson, Hedwig Brenner, Lawrence Deutsch, Laurence Hines, Andrew Horn, Allen Lawson, Tom Ohmer, and Jim Walker. The list of students is an interesting group, including several professionals well-on in their careers. One such was Andrew Horn, librarian, educator, administrator, printer, bibliographer, and historian. In 1959 Horn returned to UCLA from Occidental College to help Lawrence Clark Powell organize a School of Library Service. Horn was instrumental in planning curricula and hiring outstanding faculty for the new school, which opened in the fall of 1960, and where Horn served as professor and Assistant Dean. Upon Powell's retirement in 1966, Horn became Dean of the Library School until 1975, and continued as Dean Emeritus until 1978; he taught classes in the library school until his death in 1983. The Horn Press at UCLA is named after Andrew Horn. Worldcat records 4 copies: USC, UCLA, Occidental College, and the Library of Congress. REFERENCE: Harmsen & Tabor, The Plantin Press, No. 195.