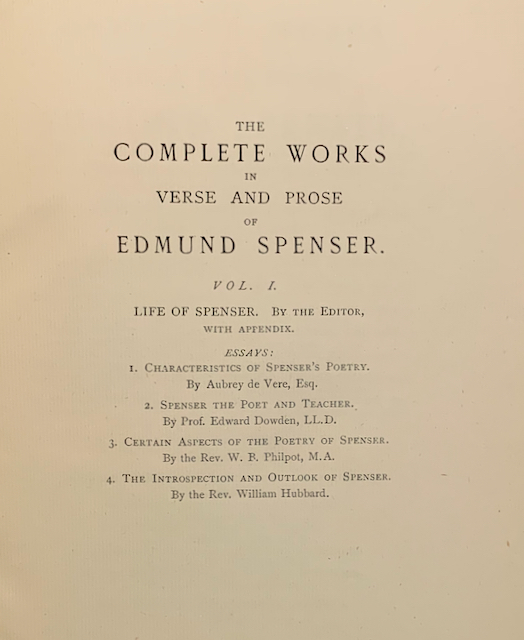 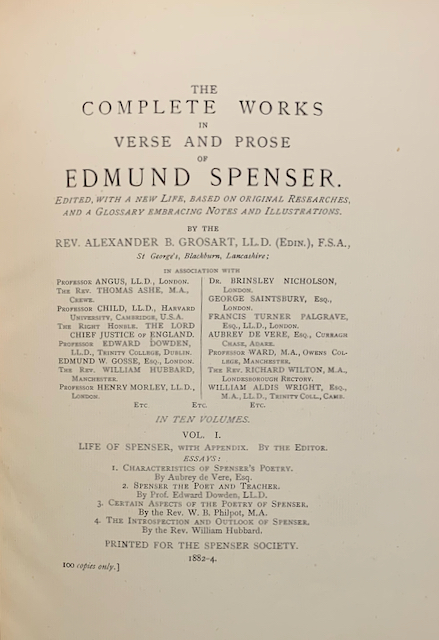 The Complete Works in Verse and Prose of Edmund Spenser. Vol. I. Life of Spenser, with Appendix. By the Editor

Volume One of Nine Only. 4to. 9 x 7 inches. [ii], lxiv, 571, 1 blank pp. Half-title; text clean, unmarked, pages very lightly toned. Full black crushed morocco, 5 raised bands, spine titled in gilt, all edges gilt, marbled end-papers, gilt turn-ins, binding SIGNED with a "B. H. Blackwell, LTD, Oxford" rubber stamp on the verso of the front free end-paper; binding square and tight, only very minor shelf wear, light offsetting to the marbled end-papers from the gilt turn-ins. GG818-166. Very Good. LIMITED EDITION of 100 copies. The Preface to this volume is by Alexander B. Grosart, and noted as being written at Brooklyn House, Blackburn, 11th June, 1884. SIGNED binding by B. H. Blackwell LTD, Oxford. Grosart's Life of Spencer runs to page 253. Edmund Spenser was an English poet best known for "The Faerie Queene", an epic poem and fantastical allegory celebrating the Tudor dynasty and Elizabeth I. He is recognized as one of the premier craftsmen of nascent Modern English verse, and is often considered one of the greatest poets in the English language. There follows Grosart's Life and 4 "Essays on Spenser", including: "Characteristics of Spenser's Poetry," by Aubrey de Vere, Esq; "Spenser, the Poet and Teacher," by Professor Edward Dowden; "Certain Aspects of The Faery Queen, and Some of the Other Poetry of Spenser," by the Reverend W. B. Philpott; and "The Introspection and Outlook of Spenser," by the Rev. William Hubbard. These 4 essays occupy pages 257 to 400 of the present volume, and are followed by an "Appendix of Notes and Illustrations and Documentary Evidences, to The Life of Spencer by the Editor," pages 403 to 571. Alexander B. Grosart was a Scottish clergyman and literary editor. He is chiefly remembered for reprinting much rare Elizabethan literature, a work which he undertook because of his interest in Puritan theology. In 1868, Grosart moved to Blackburn, a large industrial town located in Lancashire, England. He retired from the ministry in 1892, and died 7 years later in Dublin. Benjamin Henry Blackwell (1849-1924) was an English bookseller and politician, best known for founding the Blackwell's chain of bookshops in Oxford. In 1879 Blackwell opened his own shop, B. H. Blackwell's on Broad Street in Oxford. The Local fame he gained as a result enabled him to successfully campaign for political office, and he served as Liberal Councillor for Oxford North. This handsome binding is evidence that Blackwell's biblio-empire in Oxford included a fine binding shop, at least within the first 5 years after the founding of his first shop. All biographical references from Wikipedia.

Title: The Complete Works in Verse and Prose of Edmund Spenser. Vol. I. Life of Spenser, with Appendix. By the Editor

The Complete Works in Verse and Prose of Edmund Spenser. Vol. I. Life of Spenser, with Appendix. By the Editor