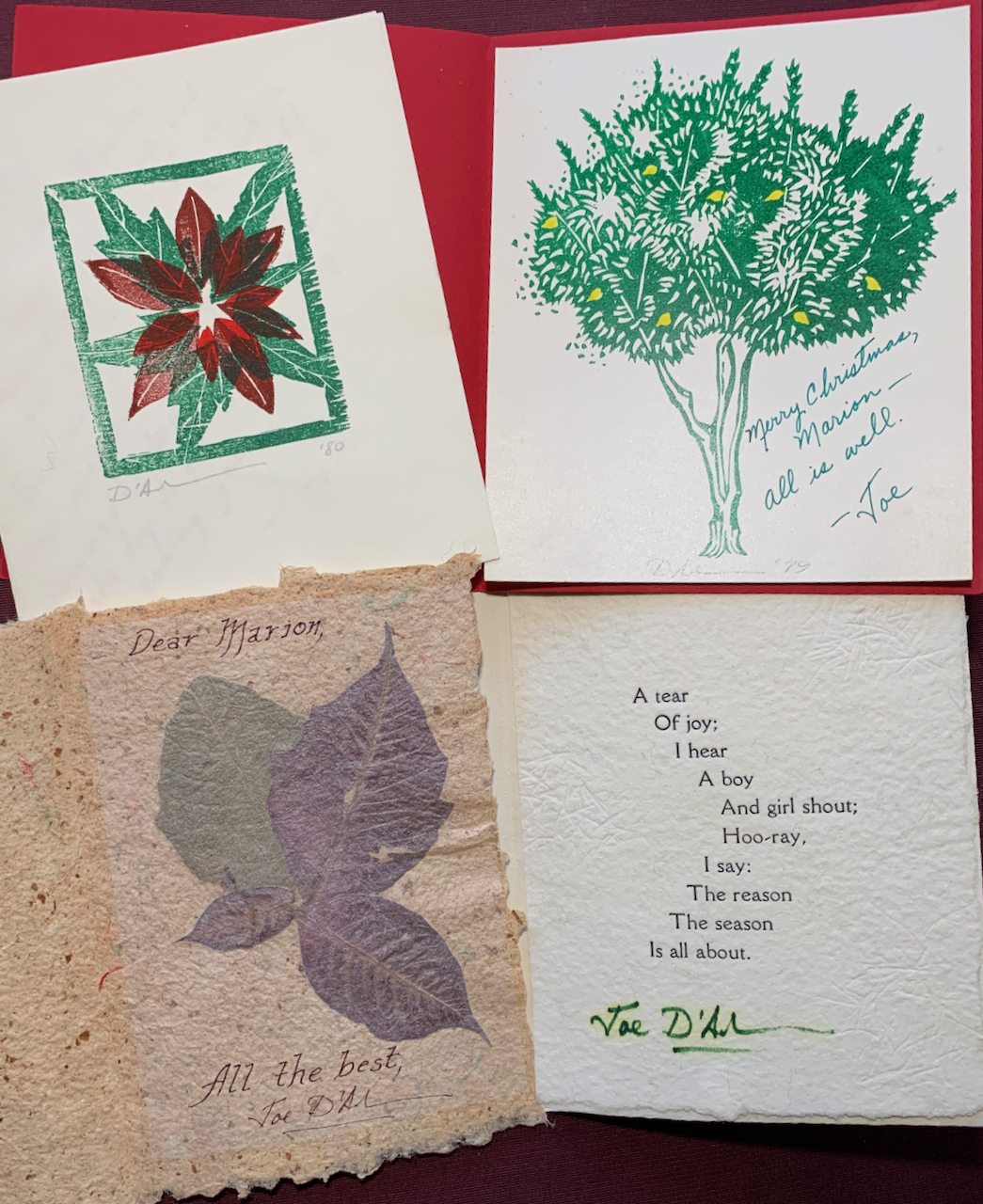 This archive includes a poster from the California State Library, and 8 pieces of correspondence between Joseph D'Ambrosio and his personal friend of 15 years, Marion Ruth Pattenson (1921-2019). Marion Pattenson was born in Los Molinos, CA, attended high school in Santa Paula, CA, and graduated from UC Berkeley with a degree in Political Science. After meeting at Berkeley, Pattenson married her first husband, William Cox. After WWII she moved to Altadena, CA where she was active in civic activities and organizations. At age 50 Marion took a job at the Huntington Library and after retirement she continued to volunteer at the Huntington Rose Garden. The Huntington Library receives occasional reference in the D'Ambrosio letters offered here. The archives consists of: 1) Christmas Card, SIGNED by D'Ambrosio and dated in the plate "'79", SIGNED with season's greeting; 2) Christmas card (bifold) SIGNED and dated '80 under a D'Ambrosio design on the front cover and with a longish manuscript season's greetings note from D'Ambrosio to Pattenson on the inside hoping for a face-to-face meeting in 1981, in the original stamped postmarked mailing envelope; 3) An artist's promotional brochure entitled "An Artist Working in the book Form: D'Ambrosio" which is "A Yearly Checklist of Works" dated 1982, and also includes a vintage die-cut angel upon which D'Ambrosio has written on the verso "Merry Christmas, Marion from Joe D'Ambrosio"; 4) Holiday card (bifold) entitled "Foot Prints in the Snow," printed on Arches paper with a printed slip of paper tipped in and SIGNED by D'Ambrosio. The bifold includes a description of the special paper tipped-inside printed on the back of the Arches paper bifold, in the original stamped postmarked mailing envelope dated 1986; 5) a holiday card (bifold) on a very interesting "banana" paper dated '87 with a cut-out on the front cover through which one can see a nature paper with a leaf included in the hand-made paper, with the ms. notation in ink "Dear Marion, All the best, Joe D'Ambrosio."; 6) 3 items relating to the sale of The Little Sand Crab from D'Ambrosio to Marion Pattenson, dated 1981 (including a handwritten sales receipt, a typed letter SIGNED, and a handwritten note; 7) Poster for the "California State Library & Courts Building II, Rotunda floor design by Joseph D'Ambrosio" INSCRIBED "To Marion ? whose kindness is forever in my memory. Joe D'Ambrosio, and extra-SIGNED and dated "'94" by D'Ambrosio, accompanied by a hand-written letter from Joe D'Ambrosio dated Oct. 5, 1994 on D'Ambrosio Scottsdale Arizona letterhead in which he thanks Pattenson for "your continuing support", gossip about his move from Southern California to Arizona, and further remarks to Pattenson that the reason he sent her an announcement for this poster was that "I wanted to show you the outcome of what you started (although you modestly deny it) fifteen years ago!"