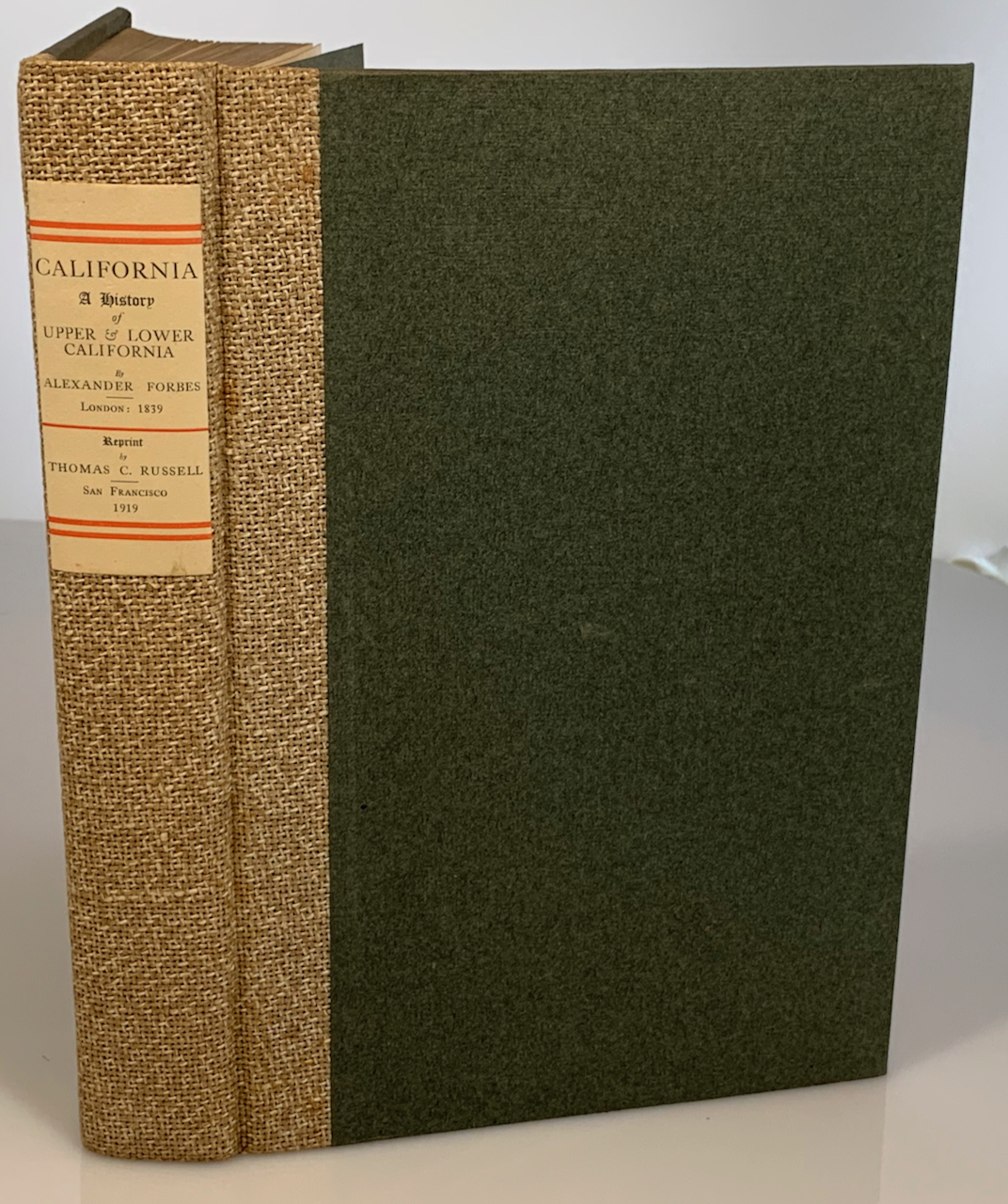 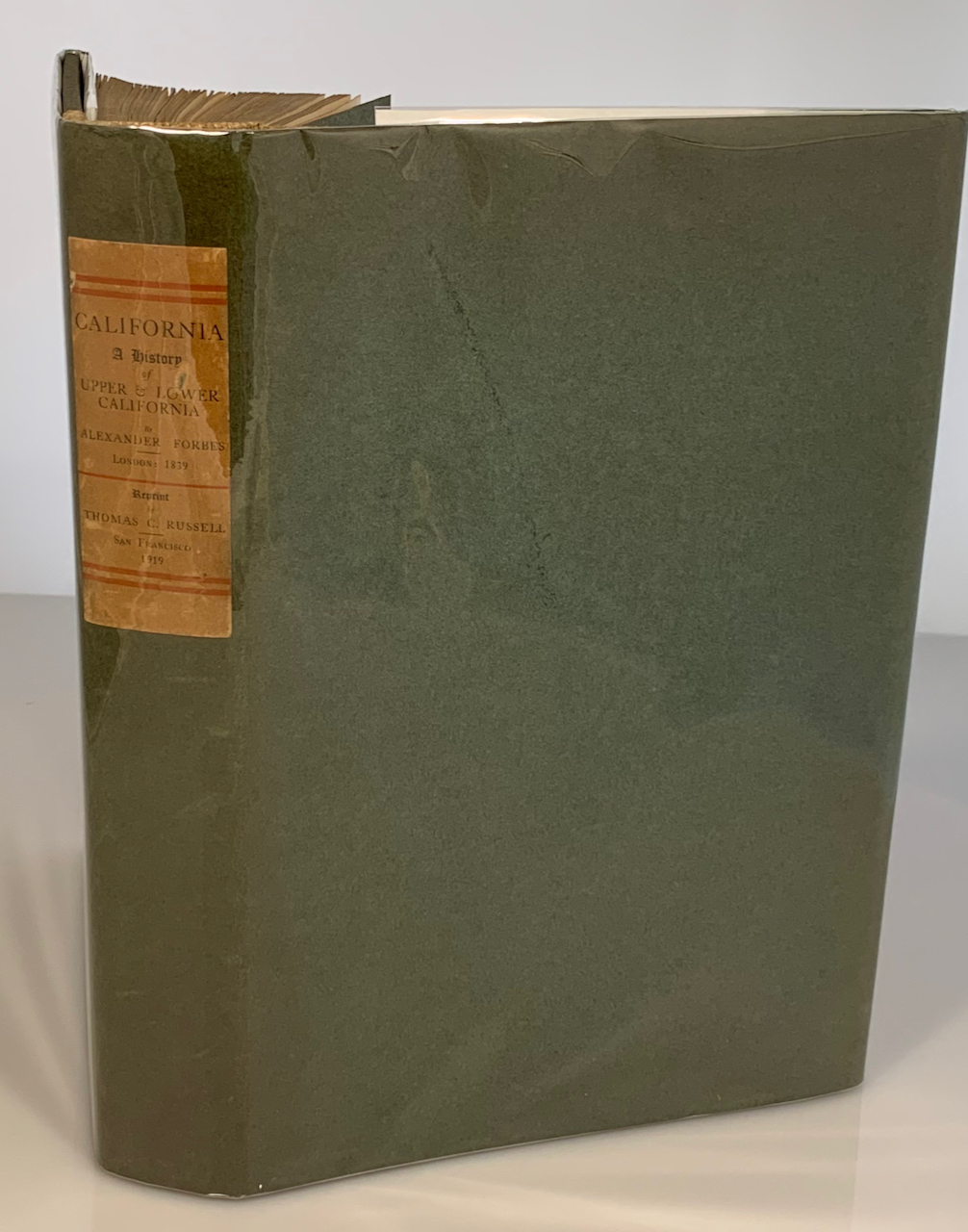 California: A History of Upper and Lower California from their First Discovery to the Present Time

REPRINT EDITION LIMITED to 250 copies, this is copy No. 204, SIGNED by the publisher, Thomas C. Russell, who also notes on the limitation page that the plates are hand-colored, also includes a copper-engraved lithographed map, a forward, and a new index. Tall 8vo. 10 1/2 x 7 1/4inches. 10a, xvi, 372 pp. Half-title, color frontispiece of Father Peyri is one of 10 engraved color plates, 1 woodcut in the text, updated index, folding map of California highlighted in colors at the rear; text clean, the folding map at the rear has a 4-inch tear starting at the hinge and extends into the image without loss. Natural linen spine, green cloth over boards, printed paper spine label, green paper dust-jacket with printed paper spine label in archival mylar, top edge gilt, green end-papers, an additional printed paper spine label mounted at the rear; binding square and tight, very minor toning to jacket. SIGNED by Thomas C. Russell on the limitation page. GOLA819-001. SCARCE. Fine. Alexander Forbes was a nineteenth-century Scottish merchant, explorer, and author. His book, California: A History of Upper and Lower California, published in 1839, is perhaps the first full account in English of California. After growing up in Banffshire and Aberdeenshire, Forbes emigrated to Tepic, Mexico where he was a merchant. He is also noted as British consul to Mexico. At the time Forbes wrote this book, California was a province of Mexico. Forbes drew upon the accounts of the Franciscan Padres as well as accounts by other agents, including southern California cattleman and landowner Abel Stearns. Forbes' work contains extensive descriptions of Mexican California, including accounts of California's agriculture and landscape. Forbes advocated that Great Britain take control of California, suggesting that the territory be ceded to the UK in return for forgiving Mexico's debt to the British government. Part II, Upper California, begins at page 79. Alexander Forbes was involved in Barron, Forbes & Co., a firm that purchased the New Almaden Quicksilver Mines in Santa Clara County. Ownership of the land was ultimately heard by the United States Supreme Court which split the land between Barron, Forbes & Co. and another claimant in 1862, the year of Forbes' death. In 1864, the Quicksilver Mining Company bought the entire operation. See: Wikipedia. "The changes of time and subsequent history have not disturbed the value of this work, for it is still considered as one of the most important upon the subject." Cowan and Cowan. "Forbes' California has always been considered reliable and accurate." J. Gregg Layne in the Zamorano 80. PUBLISHER: Thomas Chalmers Russell (d. 1931) was an important San Francisco publisher who kept classics of California history in print for the public. REFERENCES for the first editions: Cowan and Cowan, A Bibliography of the History of California, p. 217; Howes, U.S.iana, F242; Storm, Graff Collection, 1377; Zamorano 80, No. 38.

Title: California: A History of Upper and Lower California from their First Discovery to the Present Time

California: A History of Upper and Lower California from their First Discovery to the Present Time