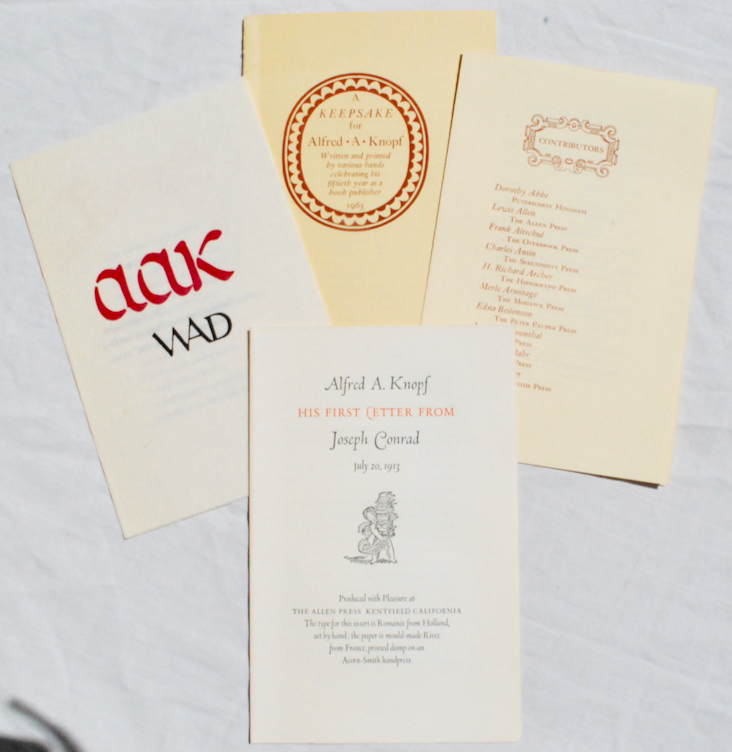 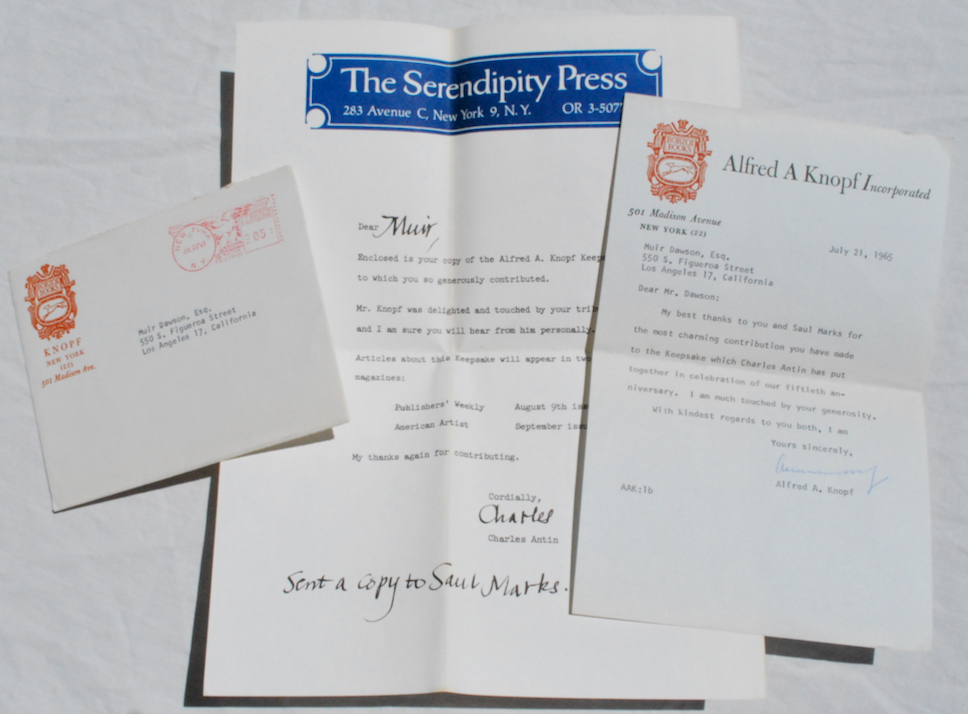 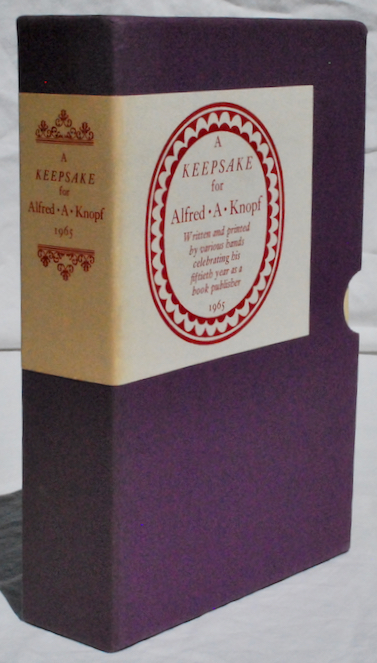 A Keepsake for Alfred A. Knopf, Written and Printed by Various Hands Celebrating his Fiftieth Year as a Book Publisher

FIRST EDITION. Slip-case measures 7 15/16 x 4 7/8 inches. Fifty-one items including title-page and forward pamphlet, "List of Contributors" bifold, 49 keepsakes printed by various private presses; text clean, unmarked with the exception of the List of Contributors, which has small pencil check marks by the name of each press; LACKING the Muir Dawson and Saul Marks keepsake entitled "The Shop Rules of Christopher Plantin at the Golden Compass Antwerp," includes 2 copies of Oscar Ogg's keepsake. Also includes 1) a TLS from Charles Antin to Muir Dawson with a short calligraphic note stating that a copy of this letter was sent to Saul Marks of the Plantin Press, on The Serendipity Press letterhead, undated; 2) A TLS from Alfred A. Knopf on Alfred A. Knopf Incorporated letterhead dates July 21, 1965 thanking Muir Dawson and Saul Marks for the keepsake they contributed to this collection in the original Alfred A. Knopf mailing envelope postmarked New York, July 22, 1965. In the purple paper covered slip-case with a printed wrap-around title label; the whole nicely preserved except with occasional age-toning. Good. Charles Antin, principal at The Serendipity Press in New York City, decided to ask a number of private press printers to create this tribute to Alfred A. Knopf by asking that each print a small piece to express their appreciation for Knopf's accomplishments and to say something about his influence upon their lives. 49 fine press printers contributed, including Lewis Allen of the Allen Press; H. Richard Archer of The Hippogryph Press; Merle Armitage of the The Mohawk Press; Edna Beilenson of The Peter Pauper Press; Joseph Blumenthal of Spiral Press; Will Carter of Rampant Lions Press; Nancy Chambers, Carolyn Hammer and Harriett Holladay of The Anvil Press; Muir Dawson and Saul Marks representing The Plantin Press but their contribution LACKING here; Victor Hammer of The Stamperia Del Santuccio; Ward Ritchie of Anderson, Ritchie & Simon; Jack Stauffacher of The Greenwood Press; Roderick Stinehour of The Stinehour Press; Emerson Wulling of Sumac Press, and Hermann Zapf, among many others.

Title: A Keepsake for Alfred A. Knopf, Written and Printed by Various Hands Celebrating his Fiftieth Year as a Book Publisher

A Keepsake for Alfred A. Knopf, Written and Printed by Various Hands Celebrating his Fiftieth Year as a Book Publisher