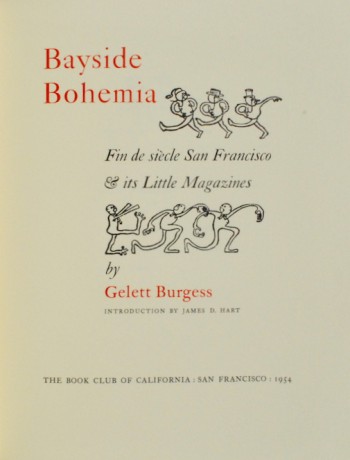 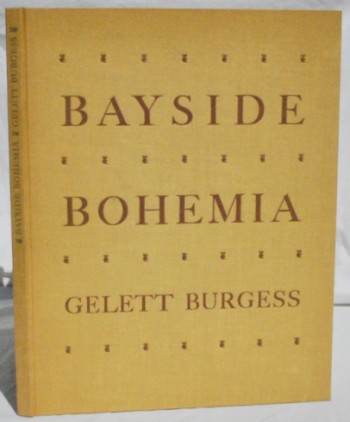 Series: Book Club of California Publication, No. 87. LIMITED EDITION of 375 copies printed by the Black Vine Press (Harold Seeger and Albert Sperisen) using Caslon Old Style linotype on machine made paper. 4to. 10 1/2 x 8 1/4 inches. (44) pp. Title page printed in red and black inks with illustrations by Gelett Burgess, 5 illustrations (4 tipped-in, 2 folding), printer's device on the colophon; text clean, unmarked. Beige cloth, titled on front cover and spine in 2 different colors; binding square and tight, LACKS dust-jacket. GG217-071. Very Good. "The first appearance in complete form of these sketches of literary activities in San Francisco at the turn of the century. The printers endeavored to follow the typographical style of The Lark and other fin de siecle publications, and succeeded admirably." "Frank Gelett Burgess was an artist, art critic, poet, author and humorist. An important figure in the San Francisco Bay Area literary renaissance of the 1890s, particularly through his iconoclastic little magazine, The Lark, he is best known as a writer of nonsense verse, such as The Purple Cow, and for introducing French modern art to the United States in an essay titled 'The Wild Men of Paris.' He was the author of the popular Goops books, and he coined the term blurb." Wikipedia. One of the Fifty Books of the Year and included in the Rounce & Coffin Club Exhibition of Western Books. REFERENCE: Magee, The Hundredth Book, No. 87.