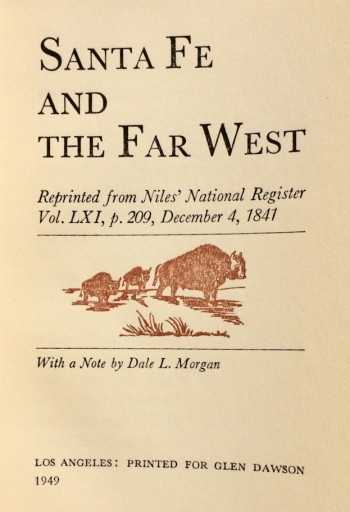 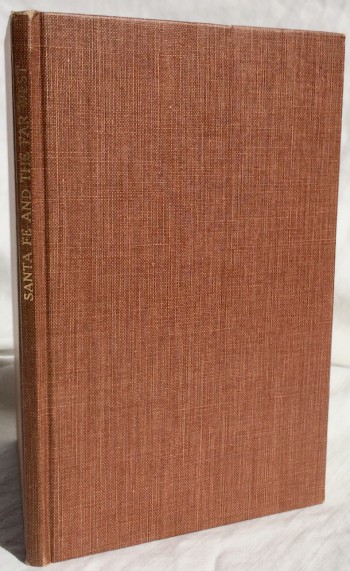 LIMITED EDITION of 200 copies, printed by William M. Cheney, decorations by Louise Ashcraft, and bound by C. Frank Fox. 12mo. 6 1/8 x 4 inches. 26, [2, last a blank] pp. Decorations by Louise Ashcraft in brown ink on the title page and colophon; text clean, unmarked. Brown cloth, spine titled in gilt; binding square and tight, very lightly rubbed, bumps to top edge of boards. Front pastedown with ownership signature of "Eck." Very Good. This letter by an anonymous author, first appeared in Niles' National Register in December 1841. It recounts an overland journey from Missouri to California, through Santa Fe, New Mexico, Las Vegas, Nevada, and on to California. It reports interactions with the Bartleson and Workman parties, and gives the impressions of an American trans-Continental traveler of the Society of Santa Fe, New Mexico in the early 1840s. Note following the text of the letter by Dale L. Morgan, an American historian, biographer, editor and critic. Morgan specialized in material on Utah history, the American fur trade, and overland trails. Morgan was known for the advice he provided to emerging scholars, often those out of the academic mainstream, who were involved in the history and biography of the American West from the 1930s to the 1960s. Among the scholars Morgan mentored were Juanita Brooks, Fawn Brodie, Bernard DeVoto and others. In his Note, Morgan leans toward ascription of the authorship of this letter to John McClure of Indiana. REFERENCE: Jones, A Los Angeles Typesticker, No. 18.