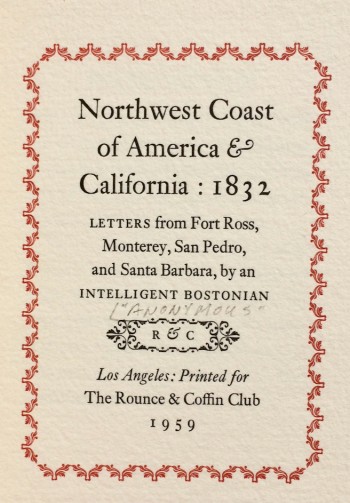 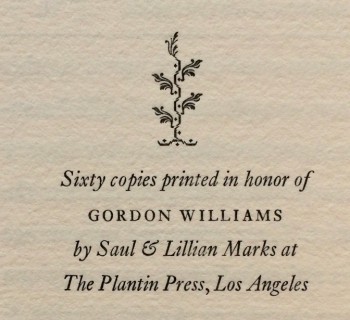 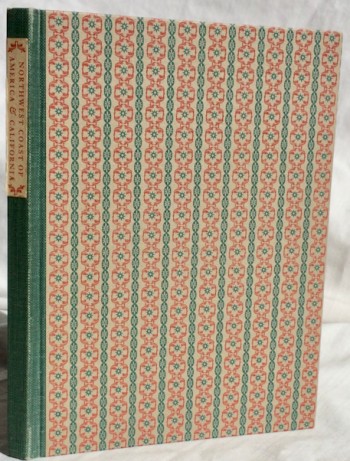 By: An Intelligent Bostonian

Series: Early California Travels Series, No XLVIII. LIMITED EDITION of 60 copies, printed in honor of Gordon Williams by Saul & Lillian Marks at the Plantin Press, Los Angeles. 12mo. 6 x 4 5/8 inches. [viii], 19, [1] pp. Half-title, title page printed within a brown typographic border, text printed within a black typographic border, printer's device on the colophon; text clean, unmarked. Quarter green cloth, patterned paper over boards, printed paper spine label; binding square and tight, lightly rubbed, minor wear to the spine label. Very Good. The anonymous "Intelligent Bostonian" wrote one of the earliest accounts of California to be published in the United States. It is reprinted here from the National Intelligencer, Washington, DC, for May 21, 1833. The 1832 visit was the Intelligent Bostonian's second. In the Rounce & Coffin Club Western Books Exhibition for 1960, No. 7. REFERENCE: Harmsen and Tabor, The Plantin Press, No. 160, variant No. 1. From Harmsen and Tabor: "Glen Dawson wrote in a private communication: 'In the Early California Travels Series I tried to have as many California printers represented as possible. I gave this brief text to Gordon Williams, who was an amateur printer as well as a librarian. He had it for months, and a week or so before taking a new job in Chicago gave it back to me and said he was sorry but he could not do it. A Rounce and Coffin Club goodbye party for him at Dawson's Book Shop was already scheduled. I took the manuscript to Saul Marks, who was noted for his slowness, and asked him if he could print it and have bound in a week. Saul rose to the challenge, and had a Rounce & Coffin Club edition of 60 ready as a keepsake, to the amazement of Gordon Williams."