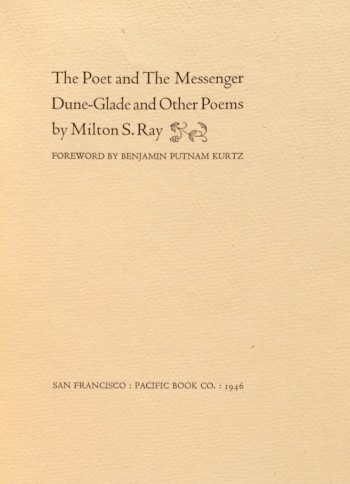 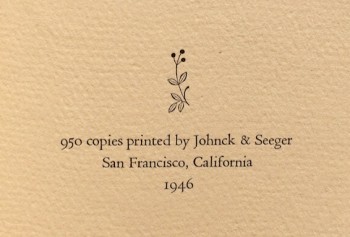 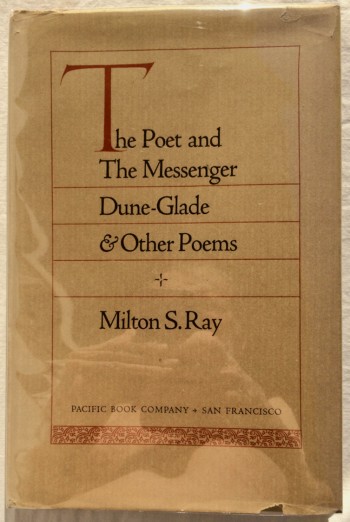 The Poet and The Messenger, Dune-Glade and Other Poems. Foreword by Benjamin Putnam Kurtz

FIRST EDITION. 8vo. 10 1/8/x 6 3/4 inches. [vi], (viii), 52, [2] pp. Frontispiece photographic portrait of Ray, decorative initials, printer's device on colophon, printed on laid paper; text clean, unmarked. Cloth, spine titling and ornaments along the hinges in dark green ink, dust-jacket in archival mylar; binding square and tight, jacket with a few chips and wear to the extremities. Near Fine. This volumes contains a collection of Milton Ray's poems, printed in the year of his passing by Johnck & Seeger of San Francisco. Milton Ray was the sion of the Ray Oil Burner Company family that produced steamship engines. Ray lived a comfortable life in a San Francisco mansion (built on a lot sold to Ray by the young Herbert Hoover), and pursued his interests in history, poetry, and ornithology. As an ornithologist, Ray travel the world and California collecting eggs, nests, and specimens and documenting his observations. This is one of several volumes of poetry published by Ray in his lifetime; many of the poems in this volume celebrate his experiences in California's natural world. Johnck and Seeger, Printers produced handsome work, known for its clean-cut quality and refined taste. Their presswork was done for many years by Lawton Kennedy.

Title: The Poet and The Messenger, Dune-Glade and Other Poems. Foreword by Benjamin Putnam Kurtz

The Poet and The Messenger, Dune-Glade and Other Poems. Foreword by Benjamin Putnam Kurtz