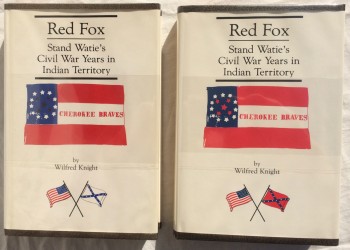 LIMITED EDITION of 1,027 copies. The dust jacket was reprinted shortly after the book had been received from the bindery and a few copies had been distributed. The printer applied blue ink over the red stars on the Cherokee Braves flag on the front cover, and those stars appear black on approximately 200 copies which were shipped out before the error was caught. The reprinted dust jacket has red stars. Two Volumes. 8vo. 9 1/4 x 6 1/4 inches. 320 pp. Black-and-white frontispiece portrait of Watie, 13 illustrations mostly portraits, map, bibliography, index; text clean, unmarked. Red cloth, spine titled in gilt, dust-jackets in mylar; binding square and tight, top edges foxed. One dust jacket has "red" stars and one has "black" stars, otherwise both volumes are identical. Publication prospectus laid-in both copies. Very Good. Stand Watie (1806-1871) was the only Indian general officer on either side in the Civil War. He was the last Confederate general to surrender to Union forces. His career, both in the Cherokee Nation and the Civil War, was prestigious and controversial. A member of the treaty faction of Cherokees, his life was continually at risk in both peace and war. REFERENCE: Clark & Brunet, Arthur H. Clark Company, No. 163.