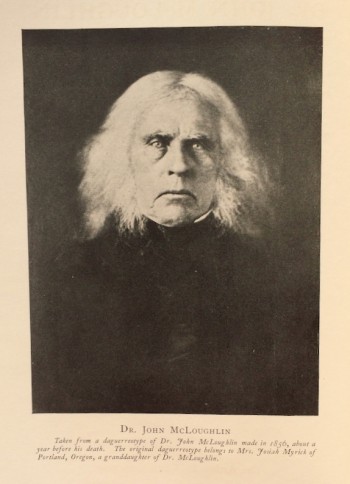 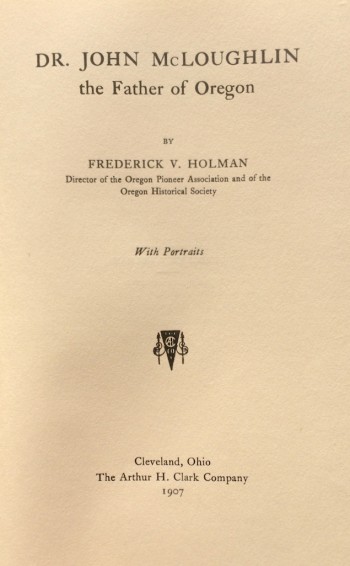 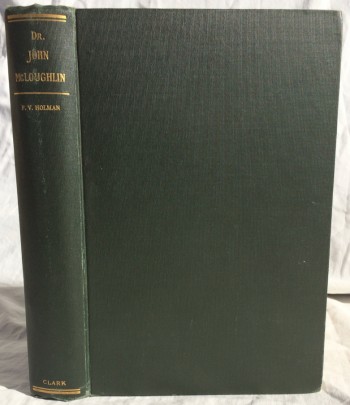 LIMITED EDITION of 1,047 copies, plus 100 copies for presentation by the author in light blue cloth. 8vo. 9 1/2 x 6 1/2 inches. 301, [1 blank, 2 ads] pp. Frontispiece portrait of McLoughlin taken from a daguerreotype of 1856, 1 portrait of McLoughlin from a miniature of 1838, index; text clean, unmarked. Dark green cloth, spine titled in gilt, top edge gilt; binding square, inner hinges cracked, corners lightly bumped, lightly rubbed. Newspaper article about McLoughlin laid-in with offsetting to front end-papers. Very Good. This early Clark Company publication was one of the first (after Audubon's Western Journal), to deal exclusively with the history of the far west. Dr. John McLoughlin (1784-1857) "was a French-Canadian Chief Factor and Superintendent of the Columbia District of the Hudson's Bay Company at Fort Vancouver from 1824 to 1845. He was later known as the 'Father of Oregon' for his role in assisting the American cause in the Oregon Country in the Pacific Northwest. In the late 1840s, his general store in Oregon City was famous as the last stop on the Oregon Trail." Wikepedia. Frederick Van Voorhies Holman (1852-1927) was a prominent lawyer and civic leader in Portland, Oregon, and President of the Oregon Historical Society from 1908-1927. A great admirer of roses, Holman helped organize the Portland Rose Society and is credited with giving Portland one of its nicknames, "Rose City." In 1907 Holman published what is perhaps his most enduring work: Dr. John McLoughlin the Father of Oregon. See: Wikipedia. REFERENCE: Clark & Brunet, Arthur H. Clark Company, No. 143.