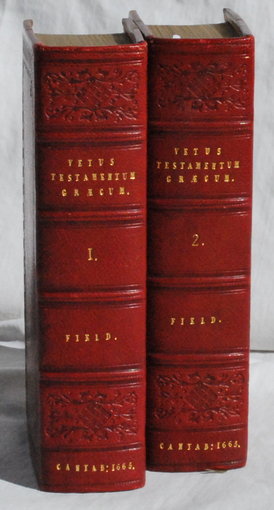 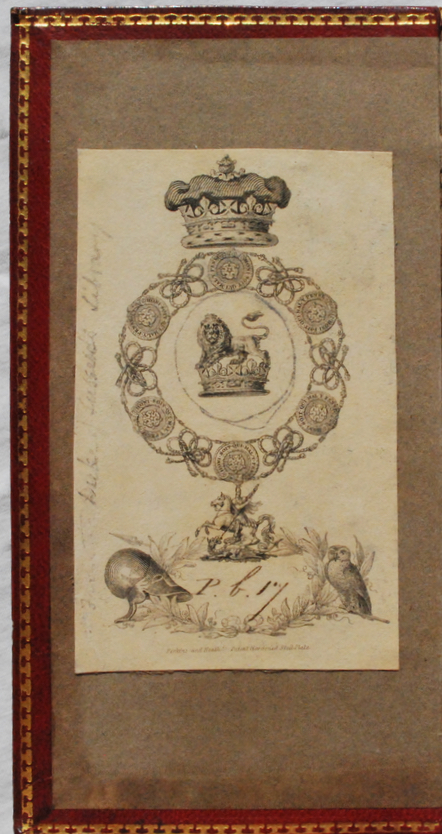 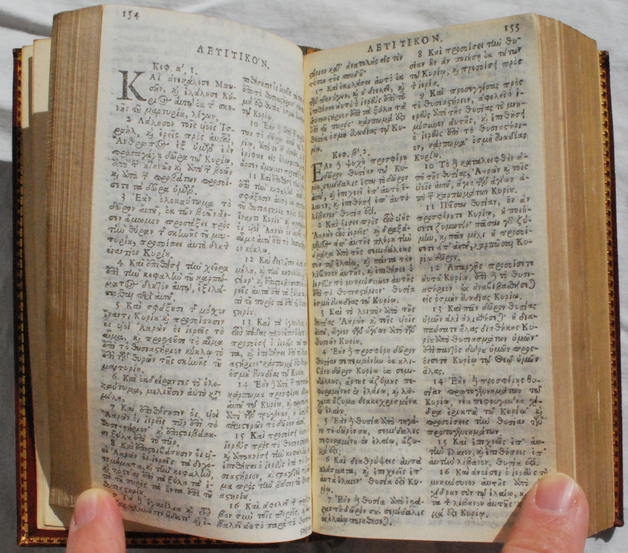 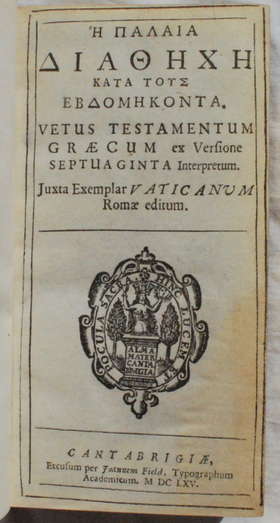 SECOND ENGLISH EDITION of the Septuagint. Two Volumes. 12mo. 5 9/16 x 3 inches. [ii], 19, [1], 755 (i.e.: 767, page numbers 647-648 and 685-694 repeat), [1 blank]; 516, 273, [1 blank] pp. Title page (in Vol. I only; no separate title-page is called for in Vol. II when bound in two volumes) printed within a ruled border, printer's device on title page, Latin Preface in Vol. I by John Pearson, Aprocrypha added at the end of Vol. II, text in Greek; text clean, unmarked, margins trimmed close, occasionally just affecting the headlines. Bound in early nineteenth-century full crimson morocco, covers decorated in blind, raised bands, two compartments in the spine decorated in blind, spine titled in gilt, all edges gilt, turn-ins decorated in gilt; binding square and tight, minor shelf wear. Bookplate of the Duke of Sussex on front paste-down of Volume I. Very Good. This edition of the Septuagint is based on the Codex Vaticanus and its sixteenth century revision, now the textus receptus of the Greek Old Testament. The first English-language translation of the Septuagint was based on this edition. The Preface is by John Pearson (1612-1686), English theologian and scholar, and Bishop of Chester. The Preface defends the 72 translators of the Greek Bible from the criticisms of Jerome (347-420). PROVENANCE: with the bookplate of the Duke of Sussex on the front paste-down of Volume I. The title was conferred on 27 November 1801 upon Prince Augustus Frederick (1773-1843), the sixth son of George III, but since the Duke had no legitimate issue, the title became extinct on his death in 1843. The Duke of Sussex was President of the Royal Society from 1830 to 1838, and had a keen interst in biblical studies and Hebrew. REFERENCE: Darlow and Moule, Historical Catalogue ... of Holy Scripture, No. 4702; Wing, Short-Title Catalogue, B2719. Does not include the New Testament Volume printed the same year.